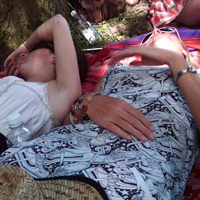 Festivals are meant to be fun and carefree, and for many that means throwing moderation to the wind and embarking on an epic bender that would make even Charlie Sheen shy away. But unfortunately, the mother of all parties can only lead to one thing - the mother of all hangovers. Although the only sure way to avoid such a fate is not to indulge in the first place, we realise this is somewhat impractical for most. For advice on festival drinking that’s easier to swallow, check out our tried-and-tested PAAM festival staff hangover survival tips.

Waking up in a hot tent undoubtedly makes a hangover worse, but before you embark on your festival frenzy, there are steps you can take in the quest to avoid the inevitable.  A bit of planning before you dive into debauchery can go a long way, so consider the following before you consume.

Many hardened drinkers start a big night out with a gut-busting meal, as a full stomach absorbs alcohol more slowly. Fatty foods are the best option if you’re going for the prevention method, as they literally line the stomach and create a barrier between your delicate innards and the beastly booze. While many in the land of fridges will simply drink a glass of milk before heading out, a greasy burger is probably your best onsite option. Be warned, however, this method simply slows down the intake rather than negating it, so you could be unfortunate enough to find your festival alcohol has less effect on the night, but just the same consequence the next morning.

Your choice of festival booze could also be a big factor in determining the state of your head the next day. While everyone knows that mixing drinks leads to a world of pain, the fact that clearer liquids lead to a clearer head is yet to make it to the masses. Congeners, also known as fusel oils, are more common in darker drinks such as port, brandy and red wine. These crafty chemicals, produced during the fermentation process, are thought to cause worse hangovers. Try sticking to lighter liquids such as white rum, vodka and gin, although one at a time is advised! 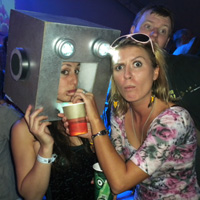 Although we all blame the alcohol when feeling out of sorts the day after drinking, the mixers you choose can also have a big effect on your hangover. Bubbles help the alcohol absorb into the bloodstream more quickly, making fizzy mixers ever-popular, but the huge amounts of sugar in most carbonated drinks will leave you with a pounding head the next day when it all comes out of your system. Try shaking your festival fun stuff with healthier mixers like fruit juice. Better still, lose your sweet tooth altogether and mix your booze with soda or still water. Downing the odd soft drink between cocktails will also help keep the dehydration dragon from your door.

Those who are with-it enough to follow a few simple rules before passing out in their tents may find they are spared festival hangover hell.  Try to eat a little something before bed, as low blood sugar levels in the morning are responsible for that dreaded wobbly feeling. Even a bit of dry bread will help settle a tipsy tum, but a kebab will no doubt be the first choice for most. A stomp in the fresh air will also help clear your head and sober you up a little before crashing, so put the beer to bed first and stumble home empty- handed. It’s also a good idea to keep some fruit juice in your tent, as the Vitamin C speeds up the liver’s metabolism and helps flush out the toxins. Also down as much water before bed as your stomach, and bladder, can handle.

The festival morning after

If you follow all our tips for avoiding festival hangovers but still wake up feeling sorry for yourself, you’ll have no option but to put your faith in hangover cures. Different people swear by different weird and wonderful solutions, but only a few are backed up by science. 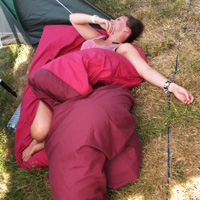 Although your digestive system will be under a lot of strain after a night of heavy drinking, a full English breakfast (or as close to one as you can find on the festival site) could just save the day. Eggs and meat are rich in cysteine and amino acids, which help send toxins on their way, and the high fat and calorie content will give even lost-hope’s an energy boost. If you’re not one to wallow for too long, however, you can also kill two birds with one meal if you use the fry up as a pre-drink stomach-liner...which leads us onto the next cure.

Although even the thought of last night’s tipple might make your stomach turn, it’s scientifically proven that hair-of-the-dog helps ease the pain of a hangover. However, once you’ve started you have to stick with it, as the body only suspends the torture as it puts all its efforts into dealing with the fresh batch of booze. Once you stop drinking again, the demons will return and no doubt punish you double-fold.

Many people dub caffeine a cure, as they believe it flushes out toxins as the heart pumps blood more vigorously around the body. However, any buzz you experience will be short-lived, as caffeine is not only dehydrating but a toxin, meaning your overworked liver will have even more bailing out to do. Fruit juice comes into its own again here, as the natural sugars will boost your energy levels while the vitamins will help your liver function. If orange juice feels too acidic, go for something more soothing like a banana smoothie, but just don’t be tempted to top it up with rum! Too much fruit juice will also eventually dehydrate your system, however, so move on to water after your fix. You can replace some of the essential salts and sugars you lost the night before with sports and electrolyte drinks. These include Lucozade and Gatorade, for example, but not standard energy drinks like Red Bull, which will just give you a high dose of sugar and caffeine – a quick fix but no solution. Remarkably, water from Mother Nature’s humble coconut is actually the best source of electrolytes, so look out for fruit vendors and juice stands.  Alternately, you could pack a few rehydration sachets (the type you take after a bout of the runs), to add to your drinking water in the morning.

The first response of many with a hangover is to reach straight for the painkillers, after all, the very name promises the world! However, all such tablets, especially paracetamol, make life harder for the liver, while ibuprofen and aspirin also irritate the stomach. The cleansing herb milk thistle is known to improve the liver’s function, which will in turn help your head. One tablet before you start drinking and one in the morning is ideal, but a last-ditch effort when you’re already suffering is better than nothing. The body’s Vitamin B bank is also raided by alcohol, so take a few tablets throughout the day to top up your stockpile. It will help maintain energy levels and keep the body functioning on a next-to-normal level. For nausea and a dicky tummy, peppermint and ginger teas will settle the storm. They are both soothing on the stomach, and the hot water will hydrate the body and help flush out toxins in the blood. Charcoal tablets can also combat that sickly feeling, as they naturally absorb any excess booze and toxins in the stomach.  Other people swear by artichoke, which can also be found in tablet form, as it speeds up the production of digestive enzymes, allowing you to metabolise and eliminate the alcohol more quickly.

Whatever you get up to at your next festival please make sure you drink responsibly. The suggestions above are just that – some of the ideas we’ve picked up along the way. We are not doctors and are not making recommendations; merely sharing our experiences with you. When taking any medication please always read the label and consult a trained professional if at all unsure.