The History of Music Festivals 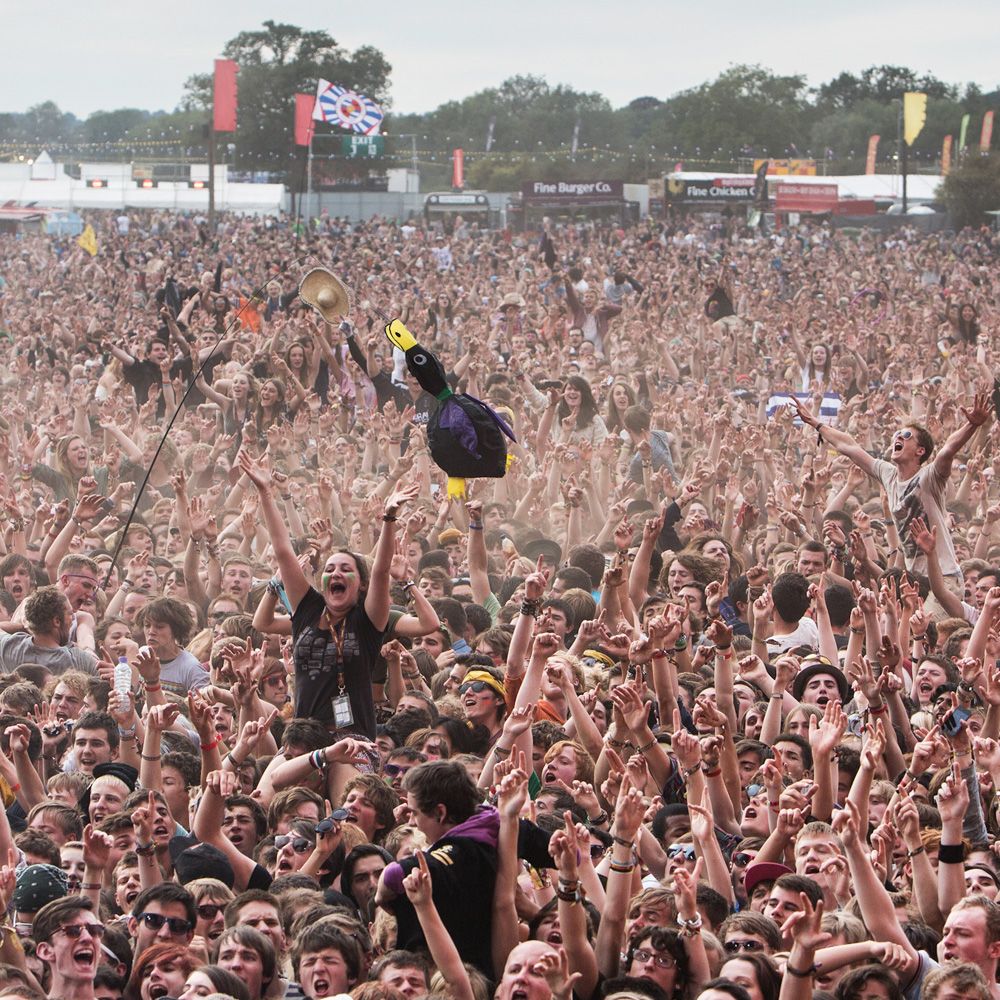 Music festivals have long-been a staple of British summertime, with revellers travelling from all over the world to jump around in muddy fields and fill their ears with the best of modern music. Last year alone, there were more than 450 music festivals held across the UK. And although Britain's weather is usually more suited to indoor pursuits, our festivals are well attended and enjoyed, come rain or shine. But when, where and how did our penchant for outdoor parties come about? Music festivals were in fact almost as common in the ancient world as they are today, although kings and deities were more often the focus of worship than our modern rock gods. In this PAAM event software blog, we pick apart the history of music festivals and decipher how they became the UK's best excuse for a summer 'staycation'.

The birth of music festivals in Ancient Greece (6th century BC)

The Pythian Games in Delphi, Ancient Greece, are perhaps the earliest example of festivals involving music. One of the four Panhellenic Games, the Pythian Games, held in honour of Apollo (the god of music), were set apart from the pack by the fact that they hosted musical competitions known as mousikos agon, as well as the usual athletics and shows of strength. Founded sometime in the 6th century BC, the Pythian Games, a precursor of the Olympic Games, featured dance, art and musical displays. Moving into the 10th century BC, Greece was still the hotbed of musical happenings. Every spring, the three-day Festival of the Vine Flower bought talents in togas to the city of Athens. Even more enthusiastic about boozing than modern festival-goers, the Ancient Greeks started the party with a silent drinking contest before enjoying song and dance performances.

Germany’s Bayreuth Festival, which first began in 1876, owes its ongoing existence to the generosity of King Ludwig II of Bavaria. Founded by composer Richard Wagner as a way to showcase his work, the event received start-up money from the crown and was attended by the king, as well as Kaiser Wilhlem I and Dom Pedro III of Brazil, in its debut year. In the darkest point of the festival’s history, Hitler used the event to warn the Unity Mitford of the oncoming war between Britain and Germany shortly before the beginning of WWII.  Today, the annual festival, which takes place in the specially-designed Bayreuth Festspielhaus Theatre, is still considered a pilgrimage for Wagner enthusiasts, who often have to wait years for tickets. 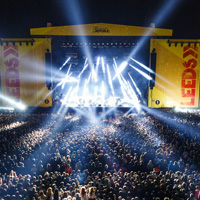 Thought to be the oldest popular music festival still in existence, the Reading Festival first surfaced in 1961 as the National Jazz and Blues Festival. The brainchild of London’s Marquee Club founder Harold Pendleton, the event adopted the decidedly hippy vibes of the time, offering tickets for as little as £2 for huge acts like The Jam, Sham 69 and Penetration. The festival was originally held at Richmond Athletic Ground, but changed both its name and location several times before finally settling down in Richmond Avenue in 1971. The event's popularity increased rapidly, eventually forcing organisers Festival Republic to open a sister site at Temple Newsam in Leeds in 1999, later moving to Bramham Park in 2002. In 1998, the festival’s name was changed to The Reading & Leeds Carling Weekend for promotional reasons, but the sponsor was finally dropped in 2007. Today, the Reading & Leeds Festivals take place simultaneously over the August bank holiday weekend, sharing the same bill across the two sites. In 2012, capacity at Leeds was increased to 80,000, set to reach 90,000 by 2014 to bring it in line with its southern counterpart. On the bill in 2012 were Green Day - who played a runaway secret gig at Reading - as well as The Cure, Kasabian and Foo Fighters. Tickets are already being sold for the 2013 event, and new stages are set to be added.

The emergence of the Isle of Wight Festival (1968)

The Isle of Wight Festival first took place in 1968, drawing a crowd of 10,000 to Ford Farm in Godshill with headline acts such as Jefferson Airplane, Pretty Things and Arthur Brown. One of the most famous early music festivals in the UK, its popularity gradually grew until it reached an unexpected capacity of 600,000 in 1970, when the likes of Jimi Hendrix, The Doors and The Who took to the stage. Daunted by the huge influx of revellers to the tiny island, Parliament passed the Isle of Wight Act a year later, banning unlicensed gatherings of more than 5,000 people. The festival was however resurrected in 2002 at a new location in Seaclose Park, where it has been held every year since. The 2007 UK Festival Awards saw the Isle of Wight Festival receive the accolade of 'Best Major Festival', while the event's top man John Giddings was commended for his 'Outstanding Contribution' to UK festivals. In 2012, approximately 55,000 people came to see Elbow, Pearl Jam, Bruce Springsteen and others.

The world's most famous modern music festival, Woodstock, was first held at Max Yasgur's dairy farm in in Bethel, New York, in 1969. Billed as "three days of love and peace", the event attracted some of the biggest artists of the day and more than 500,000 party people to the 600-acre farm. Although there were no reported incidences of violence, conservative locals from the agricultural town protested against the festival with placards baring slogans such as "Stop Max's hippie music festival" and "buy no milk". Governor Nelson Rockerfeller was also worryingly close to sending thousands of troops to the area to dispel the "unrest". Despite the opposition, Woodstock - encapsulated in the 1970 documentary movie of the same name - was a roaring success, and universally viewed as a pivotal moment in rock and roll history. A plaque commemorating the monumental festival was erected at the site in 1984, and the original field and stage area, preserved in their rural setting, are still visited by music-lovers of all generations. In 2006, the Bethel Woods Center for the Arts was opened with a performance by folk super group Crosby, Stills, Nash & Young, drawing an audience of 16,000 to the legendary site, 37 years after the historic Woodstock Festival. The Museum at Bethel Woods, which depicts the experience, significance and legacy of the festival, was opened in 2008. 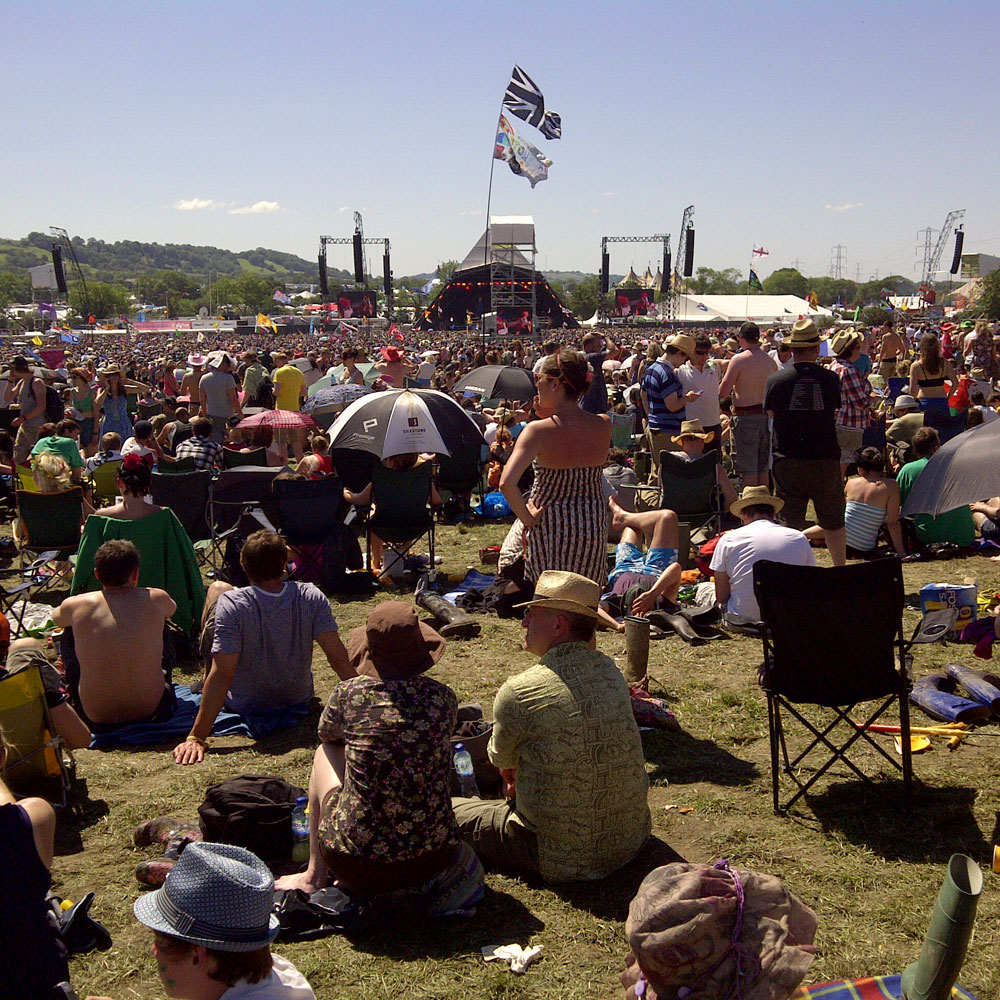 The first Glastonbury Festival, then called the Pilton Festival, took place the day after the death of Jimi Hendrix on September 19, 1970. An audience of just 1,500 paid a staggering £1 each for tickets, but were given the added financial incentive of free milk from Worthy Farm. The festival's founding father, Michaal Eavis, claims he came up with the idea after attending an open-air Led Zeppelin concert in Bath. He then persuaded a dozen or so people to invest everything they had to build a stage at his dairy farm. The Mindbenders, Wayne Fontana and The Kinks were originally billed to perform at the first festival, but were replaced at the last minute by Tyrannosaurus Rex, later known as T.Rex, Al Stewart and Quintessence. The event took place almost every year during the 1970s, growing in size each time, often due to the large amount of gate-crashers. The 1970s festivals were heavily influenced by free-love/free-music hippie ethics, which have been retained to some extent by the ongoing existence of such areas as the Green Fields and the Healing Field. The last event in 2011 was attended by more than 140,000 people, who paid £195 to see massive headline acts ranging from Coldplay to Beyoncé.

The festival saturation of the 90s and noughties

While festivals in the 60s, 70s and even 80s were still relatively few in number and small in size, the 90s and noughties have seen countless colossal events firmly established on the UK festival scene. T in the Park opened in 1994 with the likes of Primal Scream, Rage Against the Machine and Blur, while The Big Chill Festival first began with a series of parties at London's Union Chapel in 1995, before moving to Wales, Wiltshire, Norfolk and finally Eastnor Castle in Herefordshire in 2002. 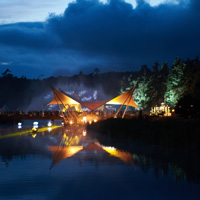 Pulp frontman Jarvis Cocker is thought to have inspired the first ever V Festival in 1996 after saying he wanted to play two outdoor venues in a weekend, while Creamfields, an offshoot of Liverpool's Cream club, pulled in 25,000 dance fans in its first year in 1998. Moving into the 2000s, British festival-goers enjoyed Deftones, Marilyn Manson and Iron Maiden at the first Download Festival in 2003, followed by Fatboy Slim, Basement Jaxx and Mylo at Bestival's 2004 debut. Family festival Wireless came to London’s Hyde Park in 2005, while new kid on the block Latitude appeared with Paolo Nutini, The Zutons and Snow Patrol as recently as 2006. Since then, a whole host of music festivals spanning different genres and themes have emerged, and the public’s appetite for them looks unlikely to wane any time soon!

Is it ok if I use this image (Leeds Festival Main Stage by Giles Smith) for my GCSE coursework? as I couldn’t find any copyright information on your site? It will not be used in anything other than a fake flyer tfor my “music festival” project for my coursework.

Thank you for checking.

The copyright is owned by the photographer and Festival Republic, head to their website for the original and press contact info!

Best of luck with the project!